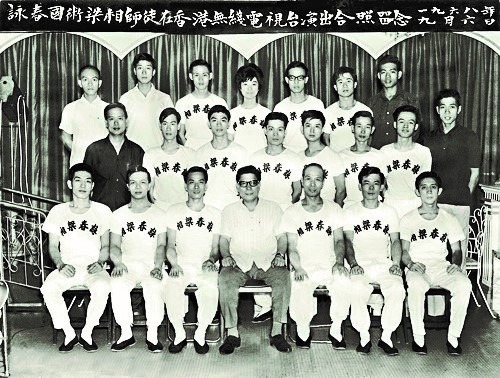 *Please scroll down for the English version

As mentioned before, Mary began to teach Wing Chun, the runners are delighted to learn which reflects how much the Hong Kong people love and admire Wing Chun. Therefore, I interviewed her teacher, Mr. Leung Kum Tong.

While working in a car repair center that had always been the target of bad guys looking for trouble, his father arranged for a very famous teacher from Hung Kuen to teach him and his colleagues on how to defend themselves after work. However, after studying Hung Kuen for over a year, his grandfather encouraged him to learn Wing Chun, because Wing Chun is a Kung Fu that makes the weak control the strong and the soft grip harder, it is more suitable for a small and delicate person like him.

Four years later, he became a hotel sales representative. Due to the Vietnam War, a large number of American troops arrived in Hong Kong for vacation. He was responsible for the accommodation of these American troops. At that time, there were crooks who often threatened him to hand over these American troops and took them elsewhere to earn consumer commissions. If he disobeyed, he would be beaten up. Since then, he determined to learn Wing Chun to defend himself.

Master Leung was formally trained under Leung Sheung as in 1962. He remembers that Wing Chun was also called Young Master Kuen because the tuition fees to learn Wing Chun were generally twice as high as those of other Kung Fu. In general, wage earners were unaffordable to learn. Master Leung said that when he was a beginner, he paid about HK$40-50 per month, while general Kung Fu only cost HK$20. The main reason is that Wing Chun is often taught individually. Master Leung said that when they were young, younger people liked to practice Kung Fu as a leisure activity. Back then, duels were very common, and there was no revenge to win or lose, but some were not as simple as martial arts. Master Leung said that he was transferred to Kai Tak Airport at the age of twenty. At that time, there were more than a dozen crooks who were threatening him to turn the business over to them, but he was less worried. Once, when he encountered three of these crooks in an ambush while away from work, they might have thought that Master Leung was being bullied. As a result, Master Leung severely beat them. Since then, more than thirty years later, his colleagues have called him “Master Tong”.